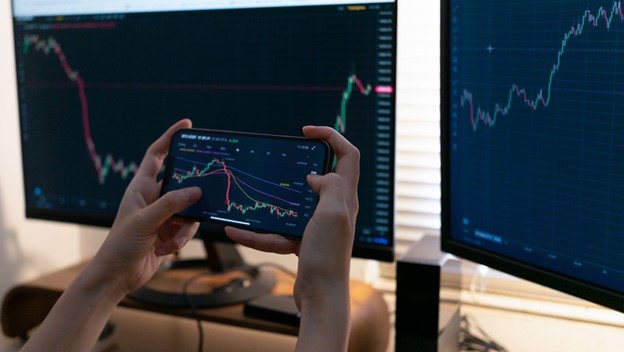 Standard smartphone trading apps, general financial apps, and specialized cryptocurrency exchanges are included below. To give you a sense of the app’s scope, we’ve given pricing information as well as the maximum amount of currencies it supports.

Using an app that offers hundreds of other services may not make sense if you’re just interested in trading Bitcoin. Choose a more diversified app if you want to trade whatever is happening right now.

Webull’s feature set is greater than Robinhood’s, even though it isn’t the poster child for trading apps. Webull, like its well-known competitors, offers no-commission stocks, options, ETFs, and cryptocurrency.

Webull, too, charges a spread for its crypto transactions, so your cost is already included. You can also trade a few more cryptocurrencies, including Cardano than you can at Robinhood.

Cost: There is no commission; however, there is a 1% spread markup (100 basis points)

Bitcoin, Ethereum, and Cardano are all accessible for trading.

While you may be acquainted with Robinhood for its user-friendly stock, option, and ETF trading software, the business has just expanded into cryptocurrency trading. It also exposes the cryptocurrency industry to its no-commission framework.

While trading seems to be free, Robinhood charges a spread markup rather than a flat fee, which means that expenditures are included in the price of a currency when buying or selling it. You can get started almost instantaneously with Robinhood’s rapid transfer feature; download and start trading.

Editor Choice:  Where to Trade Crypto Futures in the US?

Cost: $0, or commission-free; nevertheless, there is a spread markup.

The following coins are available for exchange: Bitcoin, Dogecoin, and Ethereum are just a few of the seven available.

The program does not charge a flat cost but rather a spread markup that varies greatly depending on the cryptocurrency, ranging from 0.75 percent for Bitcoin to a staggering 5% for others.

Cost: There are no commissions; however, there is a spread markup of 0.75 to 5%.

Bitcoin, Ethereum, Dogecoin, and other cryptocurrencies are accessible for trading.

You may already have PayPal installed on your phone, in which case you may start trading cryptocurrency in a matter of seconds, just like with CashApp. Cryptocurrency can’t be transferred or received, but you will trade it. On its transactions, PayPal charges a transaction fee and a spread premium.

For trades under $25, the fee starts at 50 cents and subsequently drops to as low as 1.5 percent for deals above $1,000. Anyone may view PayPal’s fee structure since it is readily disclosed. Venmo, PayPal’s sister app, offers similar features at similar prices.

Cost: Spread premium plus a 50-cent trading fee that drops to 1.5 percent after the first year.

The following coins are available for exchange: There are four different cryptocurrencies: Bitcoin, Ethereum, Litecoin, and Bitcoin Cash.

CashApp may not be the first thing that comes to mind when you think about cryptocurrency. The financial software’s cash management features are more well-known than its stock and ETF trading capabilities. It does, however, allow for cryptocurrency trading, although just one — Bitcoin.

While it is free to send Bitcoin to other users, CashApp charges a “small cost” for converting the money, revealed before the transaction is completed. This is on top of the spread markup already included in the purchase. Regrettably, it does not provide any information about its price structure.

A spread premium and a trading fee are included in the costs.

Trading is only possible with Bitcoin.

As of this writing, Coinbase supports 107 digital currencies, making it a cryptocurrency exchange that specializes in trading them. Because it includes most major currencies, including Bitcoin, that variety is likely to fulfill your crypto desire. Do you know what the cost would be? Unfortunately, Coinbase has become increasingly secretive about its trading fees, including hiding the pricing structure on its website.

At least 1.99 percent is typical (lower with Coinbase Pro)

Bitcoin, Ethereum, Cardano, and Solana are among the 107 currencies currently accessible for trading.

Kraken is yet another specialized cryptocurrency exchange that enables you to trade various currencies, including the most popular and others (such as Solana, Uniswap, Cardano, and others) that aren’t readily available on standard financial platforms. Trading is currently available in 91 different cryptocurrencies on the platform. Residents of New York and Washington are unable to utilize Kraken’s services.

Kraken charges a 1.5 percent fee (or 0.9 percent for stablecoins), but debit or credit card transactions cost 3.75 percent + 25 euro cents, and if you fund with a bank, you’ll probably be charged 0.5 percent for online banking processing.

However, when Kraken Pro is used, prices are drastically reduced. Fees range from 0.16 percent to 0.26 percent for low volume to 0 to 0.1 percent for the volume of $10 million or more in the previous 30 days. High-net-worth people may also participate in margin trading, which allows them to expand their buying power (and risk).

Cost: 1.5 percent surcharge on top of the card and online banking costs (lower with Kraken Pro)

Bitcoin, Ethereum, Solana, and Uniswap are among the 91 currencies available for trading.